Bull City Rising
About Archives @bullcity
Signs, signs, everywhere a sign
CenterFest is up next weekend -- and needs volunteers!

As summer winds down into fall, work continues actively on a cluster of sites in the American Tobacco area. Crews continue to wrap up Phase 2 of the American Tobacco Campus -- the north part of the original factory complex, including some of the very oldest tobacco warehouses and factories in the United States. (Site developer Capitol Broadcasting picked for Phase 1 of the project the southern end of the campus, which included more mid-twentieth century buildings, mitigating renovation costs and risks.)

Meanwhile, across Blackwell Street, Capitol's Diamond View II building construction continues to rise in the ballpark outfield -- the first constructed element of American Tobacco's Phase 3. At the same time, the Durham Performing Arts Center (DPAC) construction just to the north is proceeding well (thanks in part to the City's decision to bring in an outside construction manger to run the show) -- substantial completion is still pegged at April 2008.

Together, these three separate yet intertwined construction efforts are set to have a major impact on downtown Durham in the next year. Today, a progress report in photos on the efforts.

First, a quick look at some of the work happening over at American Tobacco Phase 2, the highlight of which is the addition of residential space in the campus for the first time -- primarily apartments, but about a dozen condos as well.

The brick building on the leftmost side of the picture is already occupied by Duke Corporate Education, which provides "custom corporate education" to international clients as a not-for-profit corporation. Straight ahead -- the brick building with the modern metal-walled structures above -- is the Noell Building, which will have some leasable space as well as residential units (presumably the second floor.) 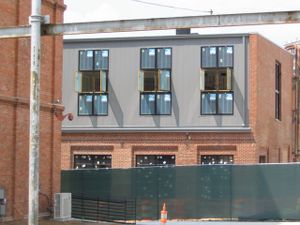 If you look closely inside the Noell windows on the second floor (click on the photo above to enlarge), you can see the drywall is in place and units seem to be progressing along nicely towards completion.

Not pictured here due to camera difficulties is the Old Bull building just to the right of these structures, at the corner of Blackwell and Pettigrew. The Old Bull will contain a number of small professional suites (suitable for a solo-practitioner CPA, attorney, etc.) but will primarily consist of residential units. Interior framing was completed a couple of months back in many units, from the looks of it, and drywall is going up in some areas at this time.

Now over across the street, where the Performing Arts Center is rising in the skyline. Structural steel is expected to continue to be erected on the site through the end of September, according to the City's latest progress report. This view from Blackwell Street shows the stage house at right, with a sloping up of steel on the left side that looks to be the structural basis for the theater's tiered seating. Here's a closer view: 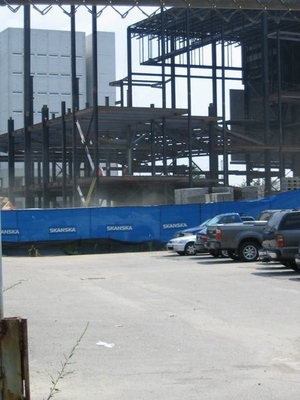 One of my favorite shots -- the view of the DPAC under construction from Mangum, with the Lucky Strike tower and other parts of the ATC visible through the superstructure, for now: 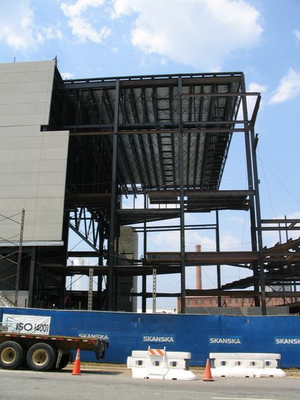 The East Deck parking structure, which will serve the Diamond View and ballpark complexes as well as the performing arts center, is coming along well, too. On its east (Mangum) side, the brick facade is almost complete: 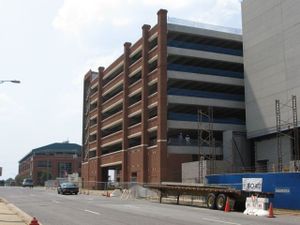 The western side of the East Deck, currently exposed concrete, is supposed to have residential units built as a wrapper disguising the parking structure (and if I recall the City's East Deck amendment from the spring properly, CBC will have to have some other kind of aesthetic wrapper on the garage if the units aren't in place.)

Finally, on over to Diamond View II, which is being built on the north end of the ballpark. Plans call for an additional office building, Diamond View III, to eventually be built to its west -- the area just to the north of the Wool E. Bull Playground and season ticketholder entrance to the ballpark. To the north of that is intended for additional residential units completing the third phase of American Tobacco.

First, the eastern side of DV II, which has the most complete brickwork to date (and which looks a bit more upscale than the older Diamond View I to its south): 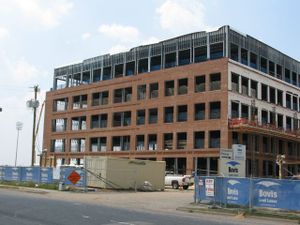 A view from Blackwell Street looking south shows how large this building is -- it has about the same square footage as the Durham Centre skyscraper downtown. The East Deck is on the left hand side of the picture (with the blank concrete facade as noted before.) 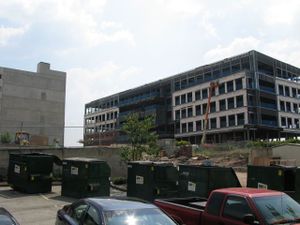 One last look at the building from its western side; the Diamond View III building will eventually be built in the open area where the parking lot and Bovis signs currently stand.

If you'd like to stay up to date on the DPAC construction, check out the web cam at this site:
http://71.120.214.22/top/liveapplet.html
You can assume control of the camera and pan around the construction site, zooming in and out as you desire.

One thing I've been pleasantly surprised by is the difference that the deck, DV2, and the DPAC have had on the view of the skyline as one comes up the freeway from RTP. While you can still see the jail in plain view, with no new obstructions, the addition of other similarly sized structures in the space to the left of it has made it stand out a lot less. I am still looking forward to the new courthouse on the south side of the jail providing some obstruction, but it's really quite substantially better already. The jail now looks like just one of a number of urban buildings, and draws much less attention to itself.

Does anyone know what the Bull's plan on doing with regard to fireworks next year? It seems like the Diamond View II building will make their current fireworks tough to pull off.

Ironically, you are working on two projects which have strong relation. art needs needs tobacco