The local funnies reported that when David Johnson's family of dealerships bought up Elkins Chrysler/Kia in downtown Durham, the plan was to move the dealership from downtown to the Southpoint Auto Park off NC 751 at I-40. Heck, the Elkins dealership's new "Johnson" signs are currently just banners over the old Elkins name.

Looks like they may not bother replacing the signs. According to Tuesday's Triangle Business Journal and Wednesday's N&O, Durham developer Scientific Properties has purchased the six-acre site and intends some mix of retail, residential, or housing on it. 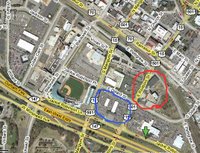 The location of the dealership -- which is sandwiched between Mangum and Roxboro Streets just north of NC 147 and just south of the new Durham County courthouse -- is a real strategic win for Scientific. It provides a 'missing link' in connecting their Venable project with the Heritage Square project they have proposed just south of 147. (In the image at right, the Venable is in red, the dealership in blue.) Furthermore, it connects to the ballpark and American Tobacco Phase III right to the west of the property -- though with Mangum in the way and the inward-focus of ATHD, it'd take herculean feats to create pedestrian-scale connections there.

I'd personally guess that Scientific doesn't have any immediate plans for the space and won't until they finish leasing up the Venable and get Heritage Square and Golden Belt well along the way. Still, this remains a major land acquisition and one which gives them a much-increased physical presence in downtown.

Couple of thoughts on this...

I've said for a while that if someone really wants to go around putting up big shiny modernistic skyscrapers in Durham, that's the area to do it in, and specifically, the Elkins/Johnson property is probably the premier spot, given how it straddles the Roxboro/Mangum connector, has lots of visibility from the freeway (actually a good thing in the commercial world), and sits far enough away from the historic buildings inside the loop that it could be done without being ostentatious. Now, I'm not saying that yet another Durham Renaissance Centre or 5 (thank you, Blazer) is what's needed, but really, it fits better there than just about anywhere else downtown. Besides, it would at least replace the jail as the dominant structure looking into Downtown coming from RTP.

On the other hand, I really hope that Andy Rothschild's not getting in over his head here. Venable isn't fully leased, he's got Heritage Square and Golden Belt on his hands, and now the old car dealership. While I'd be thrilled if all of these got done well, the fact remains that the only projects he's brought fully across the finish line at this point are his buildings on Foster St.

I have the same thoughts on this as Micheal. This area would be a good place for the newest (non-hotel, please) skyscraper. I was hoping for something important, something that isn't just a Westin or something. Something like a regional or perhaps national Biotech center. Also a good place for residences. A problem with this though, is with the new building comes the destructive parking lot.