Bull City Rising
About Archives @bullcity
A bad reaction to a worse situation
Ask, and ye shall receive

A reader asked last week if there was any more news about what's going on with Diamond View II/III and residential construction on the next phase of American Tobacco. As it happens, I had a chance to buttonhole Ken Reiter, senior development director with Struever Bros. Eccles & Rouse, after tonight's presentation on the Durham Athletic Park renovations.  I'll touch more tomorrow on the DAP plans, but Ken was kind enough to give me an update on the ATHD project. Caveat: I wasn't taking notes at that moment and Ken was scribbling the site plan on the back of a business card... so this may be slightly off. I'll correct the post if errors pop up.

Let's start with a look at the Phase III plan as posted over at Cline Design, the architects/planners for this phase of the project: 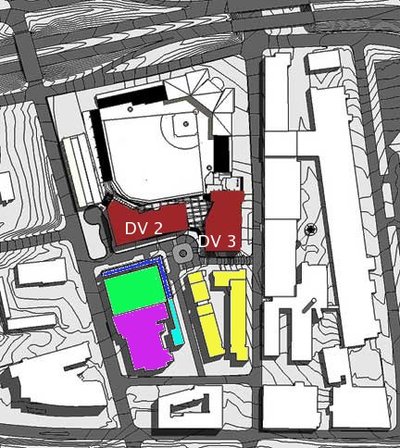 So let's cover the sections:

So what's the schedule? Although Diamond View II/III and the DPAC (plus the renovations at the ballpark) are the currently-underway projects, all of these are expected to be under some form of construction by summer's end. Reiter hopes that everything will wrap up by the end of calendar year 2008, noting that the project is currently running about six months behind the target.

As for the other mystery, the University Ford dealership listed as Phase Four on the American Tobacco website? Apparently the only outstanding issue is finding a new home for the dealership. So it looks like this plot remains available for future American Tobacco expansion -- someday. Incidentally, here's a five-year-old photo from Capitol Broadcasting's web site with a look at how all four phases were once envisioned. I for one am glad they lost the circle driveway off Willard.

Not sure that a new home is the only issue for University Ford - they were supposed to move out to the big autopark dealership (can't remember the exact name) down by Southpoint back in ~2003? - but pulled out of that deal. Someone close to the situation at the time told me that they planned to renovate UF (which they did) and knew that they were sitting on some valuable real estate should AT come to fruition.

Now - the situation may have changed since then - I've heard rumors about longstanding options, etc., most likely based on this map labelling rather than any verified information, but my suspicion is that UF is waiting for Capitol's best offer. I suppose there could be an exorbitant option out there that UF would have been willing to give for 5+ years, but that seems unlikely.

Yeah, that's one area I still think needs some fleshing out. My question to Ken was, basically, does Capitol have any site control over University Ford, and the answer essentially was, "Yes, with a caveat" -- that caveat being the new dealership home. I'm sure there's a much more interesting story deeper in the history of this, and heck; if I owned University Ford and had any say over when I was going to move, you better believe I'd try to use that as leverage. (Note: the last sentence here is rampant and pure speculation on my part. :)